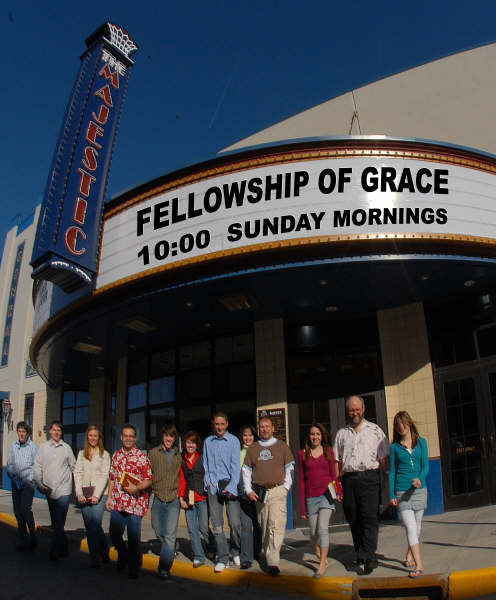 Fellowship of Grace was officially launched in October of 2006 in the Majestic Theatre in Zona Rosa.  With a launch team of around 19 people (kids included), a new church had begun in the heart of the busiest shopping district in the Northland.  Over the next several years, God worked in many miraculous ways in people's lives through the ministries of Fellowship of Grace.  In 2009, the Improv Comedy Club (formerly the Majestic Theatre) moved locations within Zona Rosa and we found ourselves without a place to meet for our weekly services.  Thankfully, we were able to find another space at one of the middle schools in the Park Hill School District and for the next 3+ years, Fellowship of Grace met at Congress Middle School each Sunday morning.

In the summer of 2013, Congress Middle School was under construction and we found ourselves "homeless" again. At the last minute, the opportunity arose to share the New Covenant Baptist Church building in Parkville for the summer on Sunday nights. We were blessed to be able to use the building for ten weeks during the summer.

Then, towards the end of that summer, a question began to surface - could both of our churches fulfill God’s mission of making disciples in a greater way if we combined our resources together? Could this really be in God’s plan for our churches? We knew it would be a complicated process - and difficult at times. But as the pastors met together and saw that both churches shared a missional, “Kingdom” perspective, they believed that both churches, while they may look very different from the outside looking in, had enough in common to be able to unite around the Gospel and move forward together to spread God’s love to an area of our city that desperately needs it.

So starting in February of 2014, our two churches joined together to form one church. We have seen God do some incredible things in people's lives since then and we are experiencing consistent growth like we never have before.

On October 2 of 2016, we were able to celebrate FOG's 10 Year Anniversary with close to 250 people in attendance for our Sunday morning celebration.  One of the more special parts of the service was when we asked those in attendance that had been saved or baptized at Fellowship of Grace over the past 10 years to come and stand on the stage together.

It was a special time of looking back and celebrating changed lives and looking forward to the future and the direction that we believe God is leading us.

In 2019, we were able to complete a building project where we added a new lobby and additional children's ministry space to accomodate the growing number of people that are joining our church.  We hope that our new space will enable us to reach more and more people with the hope found in the Jesus!

As we seek to glorify God through showing Christ's love to the world and making disciples of all nations, we are excited to see what all God has in store for us in the future!